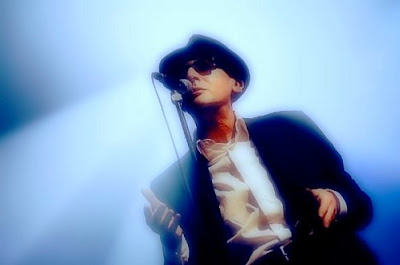 I've just completed the translation into English of Alain Bashung's final cd, Bleu Pétrole, an album that spoke directly and honestly about Bashung's upcoming death, his joys, his fears, his regrets and many profound insights into what really matters in this world; to open our eyes before it's too late, to stop screwing up our relationships with passive-aggressive behavior, to look around and see both the beauty and brutality of nature, of loving, of the human condition. With collaborators Gaëtan Roussel, who composed and produced many of these songs; another great artist Gérard Manset who composed Vénus and Comme un Lego and Il voyage en solitaire, the latter one of his signature songs; the music of Armand Méliès; and the poetry of Joseph d'Anvers (Tant de nuits), they produced a grand cd that also became an exceptional concert tour, Bashung's "farewell" tour (released in November, 2009, on dvd).

If you wish to continue to listen to these songs, what this translator asks of you in return is to purchase the cd or download. Amazon US offers Bleu Pétrole for purchase as a hard copy for as low as $12 (new and used); I-Tunes as an mp3 download. I believe Bleu Pétrole will soon be released for mp3 download on other sites as well, since all of Bashung's other cds are already on Amazon US (amazon.com) as mp3.

What follows is the link for buying the hard copy on Amazon in the United States. (You can also search for it on other sites.) If you live in France or anywhere else in Europe, you can search i-Tunes and Amazon.fr for both hard copy and mp3 download. There is also a 27-cd Coffret, A Perte de vue, which in the long run will provide you with every song that will be translated on this site. It's a fabulous collection with wonderful visuals and collectibles and a booklet of all the words in French.

For in the end, I do support the rights of the authors and encourage you to buy the cd. Believe me, you won't regret it and you will listen again and again to these songs. And now, you can also sing along with comprehension. :>>))

Thank you for your support of l'Artiste.

If you read French, this biography by Marc Besse is really worthwhile.
Bashung gave him total access for the last eight years of his life. 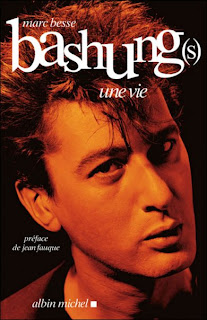 
On March 14, 2009, the world lost a great artist, Alain Bashung, a musician and singer many in France call "the last of the greats". Unfortunately, his name was known only to the French, Swiss, and Belgians and a few other French speakers and music lovers.

Bashung revolutionized the world of French rock 'n' roll and chanson with his experimental compositions and poetic texts. He was 61 when he died after a struggle with cancer; yet, in a story as heroic as they come, he toured until several weeks before his death, touching and thrilling his fans night after night and doing what he loved best: making great music with his friends.

In January, 2009, Bashung became a "chevalier" of the "légion d'honneur" (the French version of knighthood). Then, on February 28, 2009, in his last public appearance, he won three Victoires de la musique, (French Grammies) for "Best Male Singer", "Best Concert" and "Best Album" of the year (Blue Pétrole). He performed his hit "Residents de la République" and then, in an emotional tour de force, accepted the awards to several standing ovations. Bashung received the most "Victoires" over the course of his career than any other musician in the history of the award.

The hour may be late but not too late to introduce Bashung and his wonderful collaborators--lyricists Jean Fauque, Boris Bergman, Pascal Jaqueman, Serge Gainsbourg; musicians Rodolph Burger, Gaëtan Roussel, Gerard Manset, Les Valentins, Mobile in Motion (and many, many others)--to the English-speaking world. When I have shared Bashung's music with my English-speaking friends and family, they love his voice, they love the music, but they want to know what the words mean.

It is my sincere hope that, with the help of these translations, you will come to love Alain Bashung as so many of us do and always will. I invite your comments and suggestions after the translations, especially suggestions of native French speakers, which I am not. Although I have been studying French since 1981, Bashung's texts are not easy. I will start with Bashung's last recorded song and work my way to the very first.

Vive Alain Bashung! As for fans of this very special "musique française", both the proficient and the neophyte, I echo Alain: "Laissent venir, laissent venir..."

Poet, bhakti yogi, and translator of
"Bashung in English"

For the music, your best bet is to purchase the compilation of 27 cds "A perte de vue" which contains all the music of Alain Bashung and many bonuses, such as the instrumentals. It is available for the very low price of 60€; I paid 99€ when it first came out. Go on, pay the shipping cost; you will never regret it! It has a book of all the French lyrics, designer labels on the cds, and many, many 8x10 deluxe pictures of our Star. You can decorate your entire room like a teenager! La classe! Buy the coffret as soon as you can. ~LT

ps. If you find any removed videos, would you please leave a comment so I'll receive an email? Thanks!

Please say hello and let us know where you're from! http://bash-in-eng-guestbook.blogspot.com/

in order of appearance: